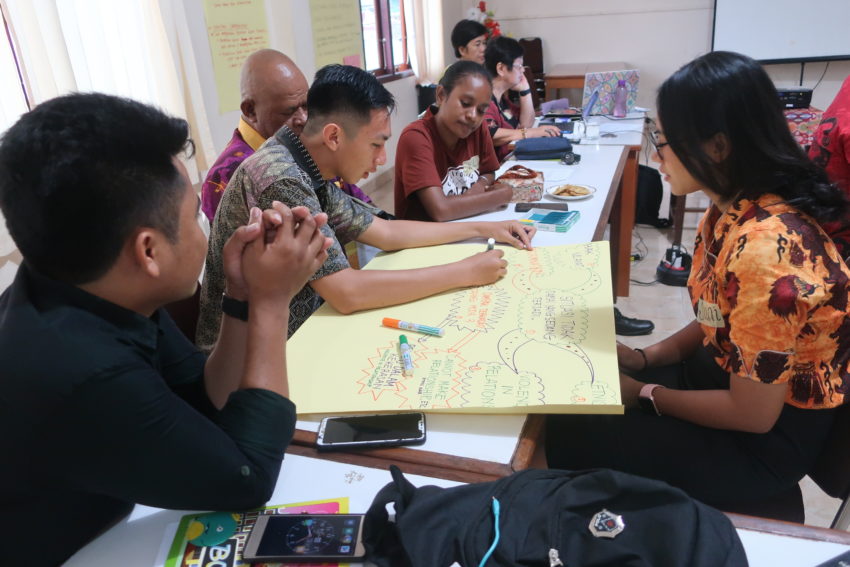 On July 20-25, 2019, ICF held a thematic workshop on peacebuilding and nonviolent communication in Rumah Retreat Savelberg, Waena, Jayapura. Rina Yanike Krebru, an SoP 2018 alumna, did the hosting responsibilities including the arrangement of the venue and the community visit. Due to the distance of Papua from other Indonesian island-provinces, some participants could not come. Of the eleven who registered, ten participants finished the workshop. Out of ten, only one was Muslim, and the rest were Christians. There were 5 males and 5 females.

As it is now a standard, an ICF activity starts with an opening ritual that reflected the culture of Papua. Then, an orientation followed that included the introduction of the history and development of YMCA, the work of APAY and the program of its project, the Interfaith Cooperation Forum. The next activity as a workshop on what educators call “KWHL chart” where participants share their answers to the following: “What I already Know,” “What I Want to find out,” “How I can Learn More,” and “What I Have Learned.” The participants went through a workshop of what they have already known about the situations of peace and unpeace in their context. This was followed by a whole day workshop on Understanding Conflict and Conflict Analysis as an important step in peacebuilding. A whole day was also spent in understanding the principles of Nonviolent Communication and doing exercises in NVC. To explore and observe how to make use of what they have learned during the first three days of the thematic workshop, the participants, along with some church project staff, went to a village in the Keerom Regency. It was a two-and-a-half hours drive from Waena, Jayapura. The village was in the middle of a large palm oil plantation that is no longer productive, and the people have more problems other than unemployment.

During the debriefing on the last day, the participants shared their reflections on what they have observed and expressed the challenges they have seen in the village. The closing ceremony was graced by the General Secretary of Papua YMCA, Dr. Ruflus, who assisted in the giving of certificates.

The new ICF Program Officer, Baidido M. Saganding, facilitated the first day sessions on the KWHL and exploring the situation of peace/unpeace in Jayapura. She also served as the documenter throughout the workshop period. The ICF Coordinator, Muriel Orevillo-Montenegro presented the history of YMCA, the work of APAY and the program of ICF, while NGS Retha Andoea of Indonesia YMCA presented the work of YMCA in Indonesia. The ICF Coordinator facilitated the two-day sessions on Peacebuilding and Nonviolent Communication. NGS Retha Andoea of Indonesia YMCA facilitated the debriefing sessions, with Rina’s assistance in translations. Throughout the week, NGS Retha served as the main translator because very few among the participants could speak English. The experience in Jayapura was both an enjoyable teaching-learning experience for all of us.