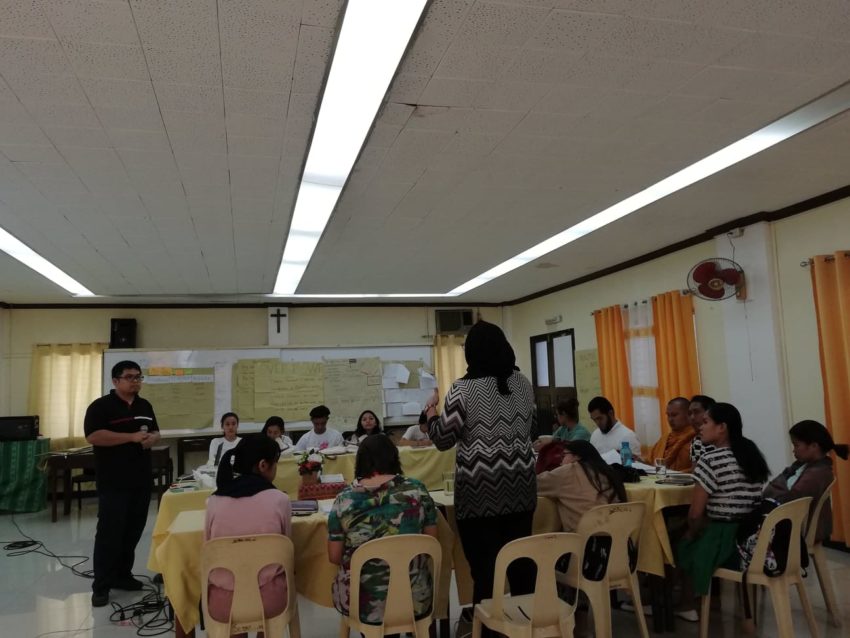 On March 29, 2019 evening, the Peace Institute organized by Interfaith Cooperation Forum concluded with a simple ritual. Nineteen participants joined the institute from March 19 -29, 2019 held in Jesuit-owned SEARSOLIN-Xavier University (Ateneo), in Cagayan de Oro City located in Northern Mindanao, Philippines. The nineteen (19) participants recommended by YMCAs and peace networks were composed of two female Muslims, eight females from different Christian traditions, and three female Buddhists. The male participants were composed of three male Muslims, two male Christians, and one male Buddhist student monk. The countries represented were Cambodia, Laos, Philippines, and Thailand. The closing ritual was graced by the President of Cagayan de Oro YMCA, Atty. Noel Beja who gave a challenge, and General Secretary Sol Marie Ucab of Cagayan de Oro YMCA. Atty. Noel Beja graciously took part in the ritual of giving the certificate of completion to the nineteen participants and to the facilitators who were present during the closing rite.

Muriel Orevillo-Montenegro facilitated the subjects on Understanding Conflict and Conflict Analysis, Conflict Resolution vis-à-vis Conflict Transformation as Peacebuilding Frameworks. Ms. Ofel Cantor of the Philippine Ecumenical Peace Platform traced the five decades of conflict and peace talks between the Philippine government and the National Democratic Front, one that made significant progress until 2017 when President terminated it. Dr. Tirmizy Abdullah sketched the history of the Moro people, the conflict with the Philippine government and the emergence of the Bangsamoro Organic Law as the outcome of the peace process. Dr. Lily F. Apura led the discussion on Peace and Religion, while Ms. Amina and Nathaniel Mambuay facilitated the workshop on Nonviolent Communication. Dr. Myra V. Waddington facilitated the discussions on Mediation and Negotiation, and Trauma Healing. Overall, the Peace Institute’s pedagogy included enhanced lectures, group work, workshops, simulation games, role-playing, community visits, dialog, and use of songs. Morning meditations considered the faith traditions of the participants. It included sitting and walking meditations from Buddhist practice.

The ICF Coordinator had enlisted Ms. Amina Mambuay and Nathaniel Mambuay of Silsilah Forum-Cagayan de Oro to serve as Local Partner in preparing the venue, arranging the visits, and all. Baidido Saganding also came to help in the documentation. Both the Mambuays and Saganding assisted the ICF Coordinator in attending to the needs of the participants and invited facilitators.

The participation in this Institute was unique because it was intergenerational, unintentionally. But they were able to blend and bond with each other quickly.   There were challenges and conflicts, but the facilitators also turned the sessions into a laboratory for the participants to learn the real-life challenges that come their way. Moreover, the participation of a Buddhist student monk helped the participant understand better the Buddhist tradition. Overall, the Peace Institute went well. ICF wants to thank all the peace networks and YMCA chapters in above-mentioned countries for their support by sending participants to the Peace Institute 1. It is ICF’s hope that the participants will be given the opportunity to share and practice what they learned during the Institute.