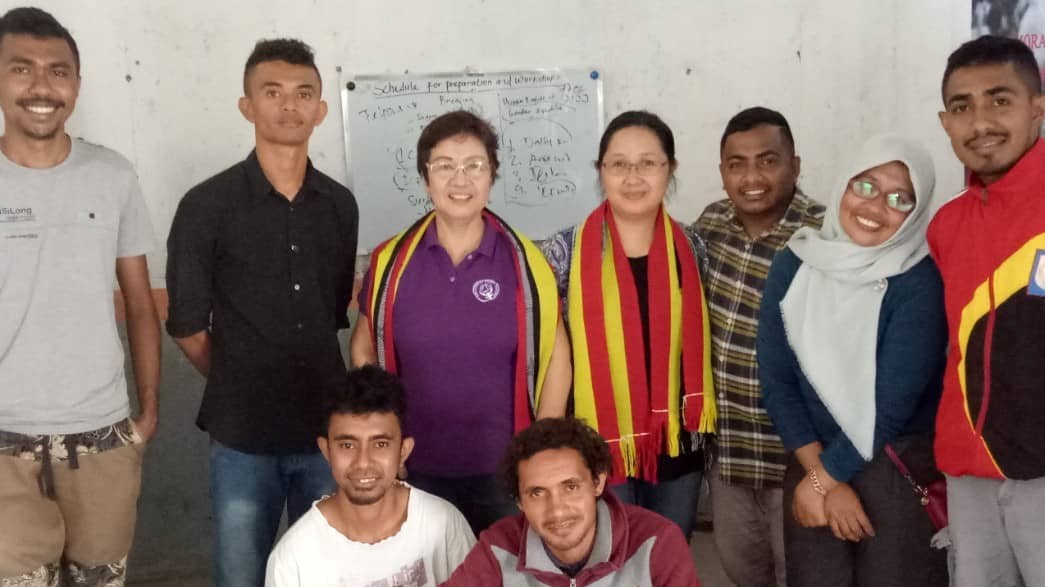 Interfaith Cooperation Forum, in partnership with the national forum of ICF-Timor Leste organized a workshop on August 26-September 1, 2018 in ISMAIK, Dare, Timor Leste. There were thirty enthusiastic participant. This includes three Indonesian Muslim participants, whose presence enriched the experience. There were 16 males and 14 female participants in all; and 6 were Muslims. The workshop was based on the general objectives of ICF, which is to “strengthen and equip the youth movement network for peace with necessary knowledge and skills.” 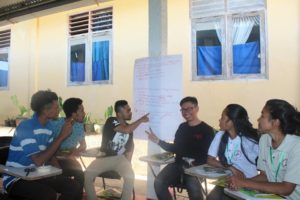 as graced by the president of the Islamic Organization of Timor Leste, Hadji Ali Al-Ayyubi, who gave the keynote address. He challenged the youth to choose the path of serving the Timor Leste people. The president of the national forum, Leonardo Gamboa Marçal welcomed the participants and the facilitators, and explained the rationale for the workshop. This was followed by National General Secretary of YMCA, Antonio da Silva who gave a brief orientation on the history and structure of YMCA. This was supplemented by Muriel Orevillo-Montenegro later on the third day, to show the context of the spread of YMCA in Asia and the recognition of the religious plurality in Asia. This understanding led APAY to create a program on In 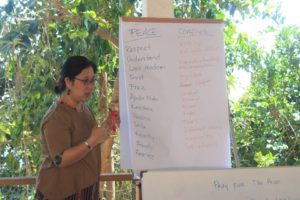 Manuel Monteiru, who was active in the human rights movement in Timor Leste and heading a human rights organization spoke at the workshop. Marilia da Silva Alves spoke on children’s rights from her experience as head of an organization that attend to the welfare and rights of women and children called Fokupers. Prof. Bernardo Leto, a university professor spoke on the religious pluralism and the importance of interreligious harmony.

Ms. Nina Nayoan, an Indonesian who once served as staff of the World Student Christian Fellowship (WSCF), a holder of a master’

s degree in biblical studies, and will be teaching feminist theology in Manado. She facilitated the workshop on gender equality and the conflicts that arise from gender inequality and injustice. The participants were also challenged to reflect on peace in relation to gender justice. Her lecture was interspersed with workshops in analyzing the realities of gender relationships in society. She praised Timor Leste for signing the UN Declaration of Human Rights, the Convention on Children’s Rights (CRC) and the Convention on the Elimination of All Forms of Discrimination against Women (CEDAW).

The ICF Coordinator, Muriel Orevillo-Montenegro facilitated the workshop on planning a program for peace. She started with a brief review on the understanding of peace – in positive and negative sense, of violence – indirect and direct, and on how people view conflict differently. This was followed by different approaches in planning such as the log frame and effect chain. However, she pointed out that planning for a peace project will be benefited more from the approach called Reflecting on Peace Practice (RPP). Five groups were formed to work on the task of identifying a problem or a conflict, identifying the forces for and against peace, as well as the key actors in the identified conflict. The group proceeded with conflict mapping, and identifying the areas that could be the entry point for intervention. Then, the participants were to make a plan and proposal based on their respective outputs that was to be presented the day after the community visit. 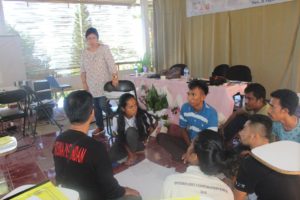 The community visit happened to be on a holiday, the day Timor Leste celebrate its “Referendum Day” when the people decided to be a country separate from Indonesia. The participants visited an orphanage for children with disabilities run by the ALMA nuns. Then the group proceeded to observe the games in Maneuana, where Horacio, a board member of YMCA has organized the youth. The community visit was capped by a hike up to the statue of Cristo Rei.

Overall, the participants were enthusiastic, led by a core of ICF-Timor Leste leaders who have demonstrated their passion and commitment to the efforts for equipping the youth with knowledge and skills to serve their country. The morning meditations were led by the participants. Umi Farida was asked to lead one morning meditation through yoga and sharing of experience. The participants learned new peace songs, which they sang in-between sessions. One evening was spent for a solidarity night, and the rest of the evenings were spent watching documentary films, such as “The Occupation of Timor Leste by Indonesia,” “What is Human Rights?” and “Girls Rising.” During the workshop in planning, the documentary film “Chicken a la Carte” was used as a jumping board for conflict analysis. The workshop ended with the giving of certificates of participant and appreciation.