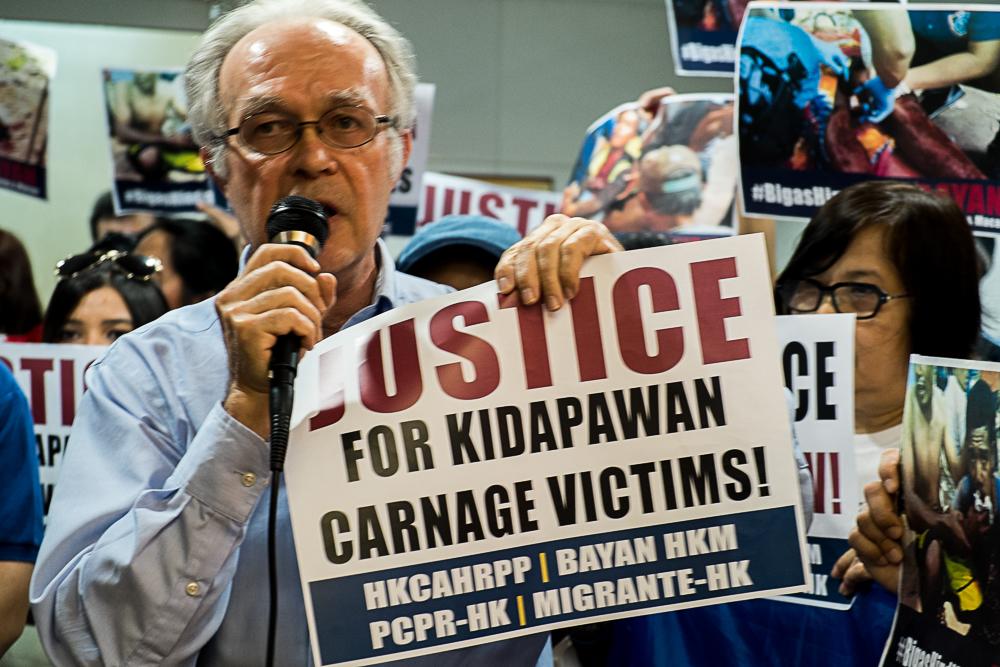 Statement against the Open Firing by the Military and Police on Protesting Farmers and Indigenous Peoples in Kidapawan City, North Cotabato, 1 April 2016

The starving and unarmed farmers of Kidapawan cried for rice. They were given bullets.

The Hong Kong Campaign for the Advancement of Human Rights and Peace in the Philippines (HKCAHRPP), a network of individuals and organizations in Hong Kong advocating for respect of human rights in the Philippines, strongly condemns the recent violent and deadly dispersal of more than 5,000 protesting farmers in Kidapawan City, Philippines.

According to the update of Karapatan, a human rights organization in the Philippines, three people have died, 116 were injured, two were tortured and 89 are still missing.

At 10:00 a.m. on April 1, police and military personnel opened fire on the unarmed farmers and Lumads (indigenous peoples) who blockaded the Cotabato-Davao highway as part of an ongoing demand for the local government to provide them with immediate assistance in terms of rice subsidies. This act of desperation was not the first time that the hungry farmers and indigenous people had sought the help of the government, but they had previously been ignored.

The province of North Cotabato, where Kidapawan City is situated, was declared by the Philippine government to be in a state of emergency after being hard hit by the El Niño drought that ravaged the farmlands in the area. A calamity fund worth P238 million (around US$5.17 million) was released by the government, but the local government, according to reports, was not intent in using this aid to help the starving farmers.

This is inhumanity. This is fascism. The ones who have violently dispersed the hungry farmers are without mercy.

Isn’t it the government’s responsibility to look after its ailing nationals, its starving peoples? Isn’t it their role to ensure that everyone is accounted for, that their rights and lives be protected at all times and not be riddled with bullets?

HKCAHRPP was established as a response of peace-loving individuals and organizations in Hong Kong to the Hacienda Luisita massacre in 2004. Seven people were killed and dozens injured when elements of the police and military opened fire at the protesting farmers and farmworkers after the Department of Labor and Employment nullified the farmers’ strike.

We cannot help but be saddened by the fact that farmers in the Philippines continue to starve. We cannot help but be angered by the fact the local government, police and military respond with brute violence like they did against the Hacienda Luisita farmers and farmworkers in 2004. There has been no progress in the way the authorities respond when the poor in the Philippines seek to air their grievances. There has been no progress in the government’s respect for the people’s human rights, for the lives of the poor and their dignity.

We urgently call on the Philippine government to:

a)    Ensure immediate protection to all the farmers and their affected families in North Cotabato, especially in Kidapawan City;
b)    Provide immediate medical assistance to all people injured by the police;
c)    Indemnify the families of those who died from the open firing;
d)    Pull out troops from the area and ensure that any militarization exercises in the area cease;
e)    Conduct an urgent and impartial investigation of this heinous incident and prosecute all perpetrators; and
f)    Immediately release the needed food and agricultural support to drought-stricken communities.

We demand justice for the farmers and indigenous peoples who have been victimized by this brutal attack against the already starving farmers.