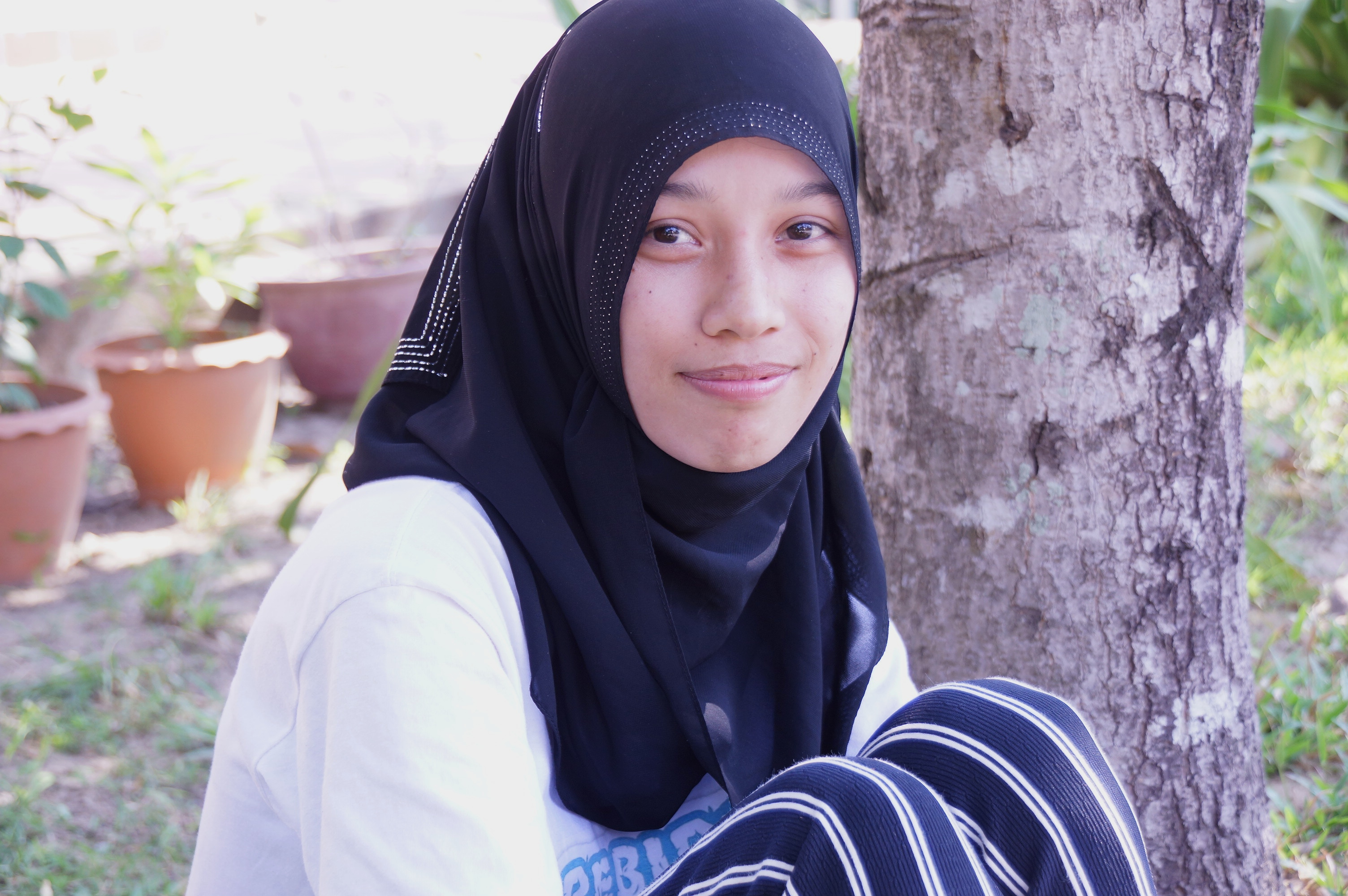 A-esha Afdal Ampatuan spent her early childhood on the run with her family.

In 2000, the entire Abubakar camp was evacuated. Ampatuan’s father was away at that time, so her family stayed behind to wait for him. They were the last family left in the camp.

“People told us the military would drop bombs on our house if they saw smoke,” Ampatuan recalls. “When we were cooking and we heard the sounds of airplanes we would put water over our fire in case they could see the smoke. We would cook a lot at a time so there was no need to cook again and again.”

Though her home was never bombed, Ampatuan saw atrocities during the all-out war and to this day cannot watch a violent movie without screaming.

When her father came back, the family finally fled the camp and walked for days in the jungle. They lived in the wild for more than a month before walking to Marawi City and starting a life again.

The Abubakar camp was destroyed and to this day no one lives there because of the military occupation. It’s used by the Philippine government for storing ammunitions.

One of the fears, if the proposed BBL is not approved within this year and within the current administration of President Noynoy Aquino, set to end in May 2016, is the escalation of tense emotions and frustrations among the people in Muslim dominated areas in Southern Philippines. These tensions may result in violence, the revival of armed conflict, and breed even more violent rebel groups.

Ampatuan’s childhood and the current political climate informed her decision to pursue political science at the University of Southern Mindanao and, later, to participate in School of Peace.

Political science seem like obvious choices for someone who has witnessed atrocities, but after learning the mechanics of the politics Ampatuan felt it was necessary for others to know these things, too.

During her first year as a political science student, Ampatuan started working with Moro and Indigenous communities as a volunteer working with her sister at a non-profit called Moro People’s Community Organization for Reform and Empowerment (MPCORE).

Ampatuan wondered if she was really contributing to change, though. After graduating with a bachelor of Political Science, she decided to pursue education to learn how to effectively share what she was learning at the community level.

“We go to the communities to educate, organize and mobilize Bangsamoro and Indigenous people to get equal rights in government social services.”

Ampatuan also helped found Youth Alliance for Peace at her school — a club made up of 10 active members who focus on interfaith work.

Together with YAP, Ampatuan hosted peace forums in high schools in the region with the goal of working together for change.

“We need to help each other, we need to support each other in order for our province to be successful,” Ampatuan says.

Although she was learning a lot in school and sharing her knowledge with other students and youth, she felt she needed to learn more to contribute to the movement for peace and justice in Mindanao.

Ampatuan participated in the most recent School of Peace in Cambodia.

“I wanted to learn something new that we can use to make our movement and our vision richer,” she explains.

She learned a great deal that will contribute to her work with MPCORE, but also some important lessons about herself.

“When I first come here, I’m the kind of person that will automatically react when I’m not agreeing on someone’s idea. You can see it in my facial expression and I always say what’s in my mind. Along the way I realized that respecting others’ ideas is more important. After SOP I learned how to listen first and think before I speak. Do I really need to say this? Or no need?”

Over the break between the second and third module, Ampatuan led a workshop on peace and diversity at her alma mater for a group of political science students using many of the principles she learned at SOP.

She also proposed and helped lead a municipal youth summit on the theme of empowering youth for justpeace together with the Youth Alliance for Peace members. This summit brought together Christian, Muslim, and Indigenous young adults to talk about peace, diversity, interfaith dialogue, and the role of youth and young adults in the peacebuilding process.

Ampatuan was also invited by her provincial government to share at the Young Cotabato Leadership Conference about her experience at SOP in Cambodia and what inspires her to continue leading.

Her time at SOP may be over, but Ampatuan feels she has a responsibility to share her experiences and the lessons she’s learned.

“After SOP, I really need to work to educate my people about our identity. Most youth, like me, don’t know what kind of ancestors we had, what practices, what beliefs,” she says. “I want to collect stories from my tribe, from the elders. I want to know more.”

Ampatuan plans to continue her work with the Youth Alliance for Peace and for MPCORE, but hopes to improve the curriculum with lessons from the School of Peace curriculum.