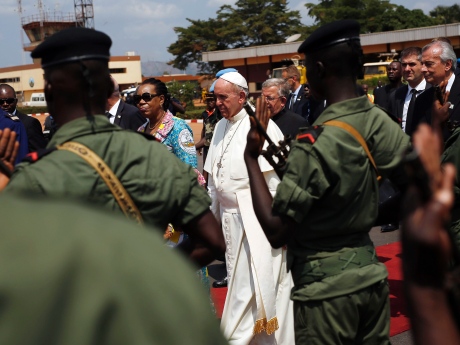 “Christians and Muslims are brothers and sisters.”

Pope Francis said this after meeting Muslim leaders at the Koudoukou mosque in Central African Republic’s (CAR) capital of Bangui during a six-day peace pilgrimage last month in Africa. He added that “together, we must say no to hatred, to revenge and to violence, particularly that violence which is perpetrated in the name of a religion or of God himself.” (Read more in the International Business Times)

These words are important for Christians and Muslims in the area to hear. The CAR has been experiencing sectarian violence since March 2013, and like all civil wars, it is complex. The country is predominantly Christian with Protestants and Catholics making up about 80 per cent of the population, while about 15 per cent is Muslim.

In March 2013, a Muslim group calling itself “Seleka” staged a coup chasing the Christian President out and replacing him with a Muslim leader. Soon a group made up primarily of Christians formed to retaliate. Called the “Anti-balaka” movement, the members soon drove the Muslim rebels out of the capital and began a sweep though Muslim areas of the country seeking revenge. Many Muslim villages were completely destroyed and the residents either killed or driven into neighbouring countries. Some people were forcibly converted to Christianity by the anti-balaka militia. The UN has hesitated to call it “genocide” but they do say there appears to be ethnic cleansing of the Muslim population.

These words are also important for the global communities of Christians and Muslims. While we hear so much about terrorism caused by Muslim extremists, we also need to be equally aware of atrocities carried out by extremists of other religions. They are all equally abhorrent.

As Pope Francis said, we are all brothers and sisters. Let us never forget that. When we recognize our oneness as created by a compassionate God, surely we can find the wisdom and courage to end extremist behaviours coming from all religions and political ideologies so that justpeace can flourish. It is up to us. Let us remember these words:

“Together, we must say no to hatred, to revenge and to violence, particularly that violence which is perpetrated in the name of a religion or of God himself.”