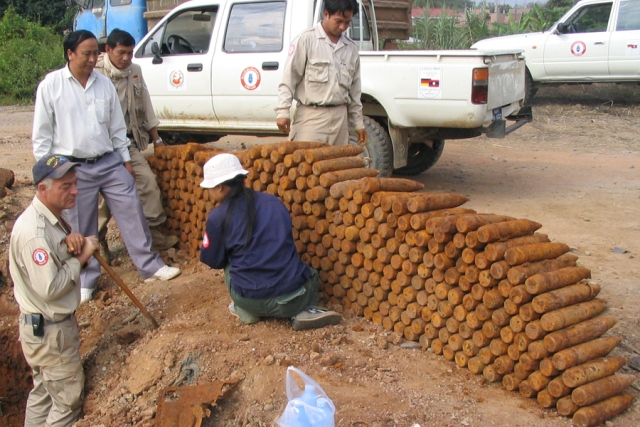 Between 1964 and 1973, the United States dropped more than 2 million tonnes of ordnance on Laos during 580,000 bombing missions. That’s equal to one planeload of bombs ever eight minutes, 24-hours a day, for nine years — therefore, Laos is the most heavily bombed country per capita in history, according to Legacies of War. These attacks were part of the U.S. Secret War in Laos to support the Royal Lao Government against the Pathet Lao, (a communist movement supported by many Northern Vietnamese of Lao ancestry) and to intercept an area called the Laotian panhandle, which the North Vietnamese Army was occupying to use for its Ho Chi Minh Trail supply corridor. Many villages were destroyed in the bombings, and hundreds of thousands of Lao civilians were displaced during the nine-year period.

More than 40 years later, the aftermath of the Secret War is still devastating, according to Legacies of War:

• About one third of the land in Laos is contaminated with leftover unexploded ordnance (UXO), or explosive weapons (bombs, bullets, shells, grenades, land mines, naval mines, etc.) that did not explode when they were employed and still pose a risk of detonation.
• At least 20,000 people have been killed or injured by these UXO in Laos since the Vietnam War-era bombings ended.
• Many cluster bomblets became buried in the earth – waiting for an unsuspecting farmer to place a shovel in the earth or the monsoon rains to uncover them.
• Many farmers in Laos know their land is contaminated but can’t afford another plot. They simply have no choice but to cultivate their land and risk unearthing an UXO.
• The most common injuries victims sustain from a UXO explosion include loss of a limb, blindness, hearing loss, shrapnel wounds, and internal shock wave injuries.
• Over the past four decades, only 500,000 of the estimated 80 million cluster munitions that failed to detonate have been cleared.

Though the war in Laos officially ended in 1975, it still continues in the form of suffering by civilians, especially peasants in the countryside. Unexploded ordnance blankets the countryside where farmers try to eke out a living growing rice, fruits and vegetables. Courageous work to remove this ordnance is being carried out by well-trained Laotians, but the world is very slow and dangerous.

There is always a dream that new technology will be developed that can more safely and quickly find these explosive devises, but waiting is a luxury the farmers cannot afford. They need a solution now.

Perhaps a more important technology that needs our creative efforts is the technology that would make war irrelevant. If we focused our energies on that we could begin to imagine a more peaceful, safer and sane world