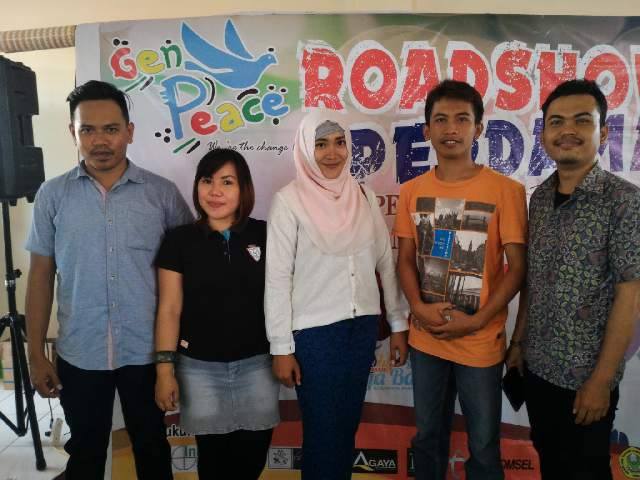 Before she went to School of Peace, Suwarti Ningsih says she was almost a fundamentalist in her identity as a Christian.

“If Muslims came to our house we had to be careful. My mom taught me like that. I could not directly accept what they would talk about. My mom also said that Muslims are our enemies because of the conflict that happened from 1998 to 2005.”

“In my village we are majority Christian and in that time there was an attack from the Muslims. We were not safe because every day there were bombs and shooting,” she explains.

Ningsih and her family had to move into a refugee camp when she was young. There it was difficult to live a normal life. She left her friends behind in Poso.

In her young adulthood after the conflict, Ningsih worked at a youth center connected to World Vision and Church World Service in her district of Indonesia.

“I think I found my passion when I learned to work with the community.”

Through her work at the youth center she became friends with Wawan, a Muslim man her age who also worked there, but something stood between them.

“Before SOP we had a barrier but did not see it. I just did projects by myself because I knew he was a Muslim.”

Wawan and Ningsih ended up on a learning journey together and now are strong partners in the workplace.

It all started at the School of Peace.

An Education in Interfaith Dialogue

“One of the staff of World Vision Indonesia gave us (she and Wawan) the information about School of Peace. Our challenge at that time was we did not have any money. We were doing our work as volunteers; there was no salary. So we asked World Vision if they had budget for us. They did not, but they said if we would apply they would write a recommendation for us.

“Wawan suggested we go to the local government to see if they could help us get money to take English courses and get passports. The local government gave me five million rupiah. It was lucky for us that they supported both of us to go to SOP,” she says.

Ningsih went to SOP hoping to learn new things that would help her to respond to the conflict context of her home.

“At SOP I learned that we all come from different identities. This made me open-minded,” she says.

One day she and her group partners from Cambodia, Philippines and Nepal had to choose a topic to present on. They chose “Polygamy in Islam,” but this caused conflict between Ningsih and a fellow participant.

“Because she is Muslim, she did not want to talk about this topic. She said it was very sensitive and suddenly she was angry at me about religion and we fought. So we changed the title to ‘polygamy’ not ‘polygamy in Islam.’ I did not want to blame her because she’s Muslim. I said I’m also a minority in my country, a Christian minority in Indonesia. This is part of our identities as both Christian and Muslim,” she says.

“It made me think we don’t need to put an identity of religion first. The impact of putting religion as our identity is that we fight.”

Ningsih is grateful for learning more about the issues central to her work.

“People seldom have the chance to learn in another country, but ICF gave me this opportunity. SOP helped me to focus on my issues. I work with women, I work with youth, I work with children. ICF saw my work in my focus areas and helped me learn and understand more about them,” she says.

When they attended SOP, Wawan and Ningsih did not have university degrees. They had only finished high school.

“We thought education was important, so we gathered money to go to university. We had big dreams because Wawan’s mother was also widowed. He said, ‘Even though our mothers are widowed and we have no money for university, we will still try,’” she explained

Both Ningsih and Wawan have now graduated from university.

Ningsih remembers learning to pair action with reflection at SOP. She says she sees her work in the community as the action response to the reflection she did at SOP and continues to do as a member of ICF.

When Ningsih and Wawan came back, they started a new women and children’s care community.

Ningsih is a busy woman. With all of her community organizing roles, she is constantly applying what she learned at SOP by encouraging people in her groups to think critically.

“I teach about identity, about how we see other people who are different from us, maybe from a different tribe—in Indonesia we have many tribes. Because of what happened in Poso, we have to think deeply. What happened actually? It’s not just a conflict among Christians, it’s some design of people who have power in our country. I always bring these ideas when we have talks with women’s groups and young people.”

Her community activism is always changing to adapt to the needs of the people she helps.

“I think that I have to share my knowledge about the law. Wawan’s friend said that maybe I should focus on economic issues. When I worked with World Vision of Indonesia I focused on women’s groups, especially on economic empowerment.

“We just had a workshop to build a strategy because the alumni of the alternative women’s school want to know what else they can do after they finish their class. So, we think we will focus on economic empowerment.”

With so many programs going, it might be easy to get discouraged or worn thin, but Ningish stays motivated by the impact she sees from her work.

“In one village, every year we celebrate Thanksgiving day in September. It comes from the Pomona tribe, which is a majority Christian. Like we do on Christmas day, we have an open house with a lot of food. During this time one year, we visited a woman in a village on the coast of Poso. In that place there is a mix of Muslim and Christian people.

“When we visited, I saw that all people, both Christian and Muslim, celebrated together. In my place only Christians celebrate. Muslims do not want to come because the food might be haraam (forbidden by Islamic law).

Sharing stories like these is only one of many strategies Ningsih uses in her teaching.

“Something we have to do is make analogies. Like a broom: if we use only one stick we can do nothing, but if we put together many we can clean the whole yard.”

With the women’s alternative school, Ningsih and her colleagues often use food to bring people together too. Once a month they invite people from different villages and religious groups to share a meal.

“One woman, before she joined the women’s school, was exclusive. She didn’t want to have relationships with Christians, but when she had time to share, she made herself comfortable to talk about the conflict. She said when she was in the refugee place with Christians she felt afraid of haraam food. She had prejudice that if she visited a Christian house they would serve haraam food. When we had time together she said, ‘Now I can go to your house on Christmas day or Thanksgiving day.’”

With all of the changes in her community work, Ningsih believes she and her colleagues have grown more effective in their strategies.

“Before we did not work in the village, the women’s groups came to our office. But we thought that it was not an effective way. We thought, we have to make a village approach. So, now we take time to work with them in their home, at their beach, their place in the village.

Ningsih first learned this approach from the community organizing module at SOP.

Their work continues to expand to meet the needs they see in their communities.

“We’re working on strategy for each context in the other places in Indonesia. Now the alternative women’s school has started the women’s school institute. I have to teach economics in Palu, Poso, and another district too.

Given Ningsih’s commitment and dedication, the ICF national forum in Indonesia is sure to grow just as the work of social justice in her home already has.