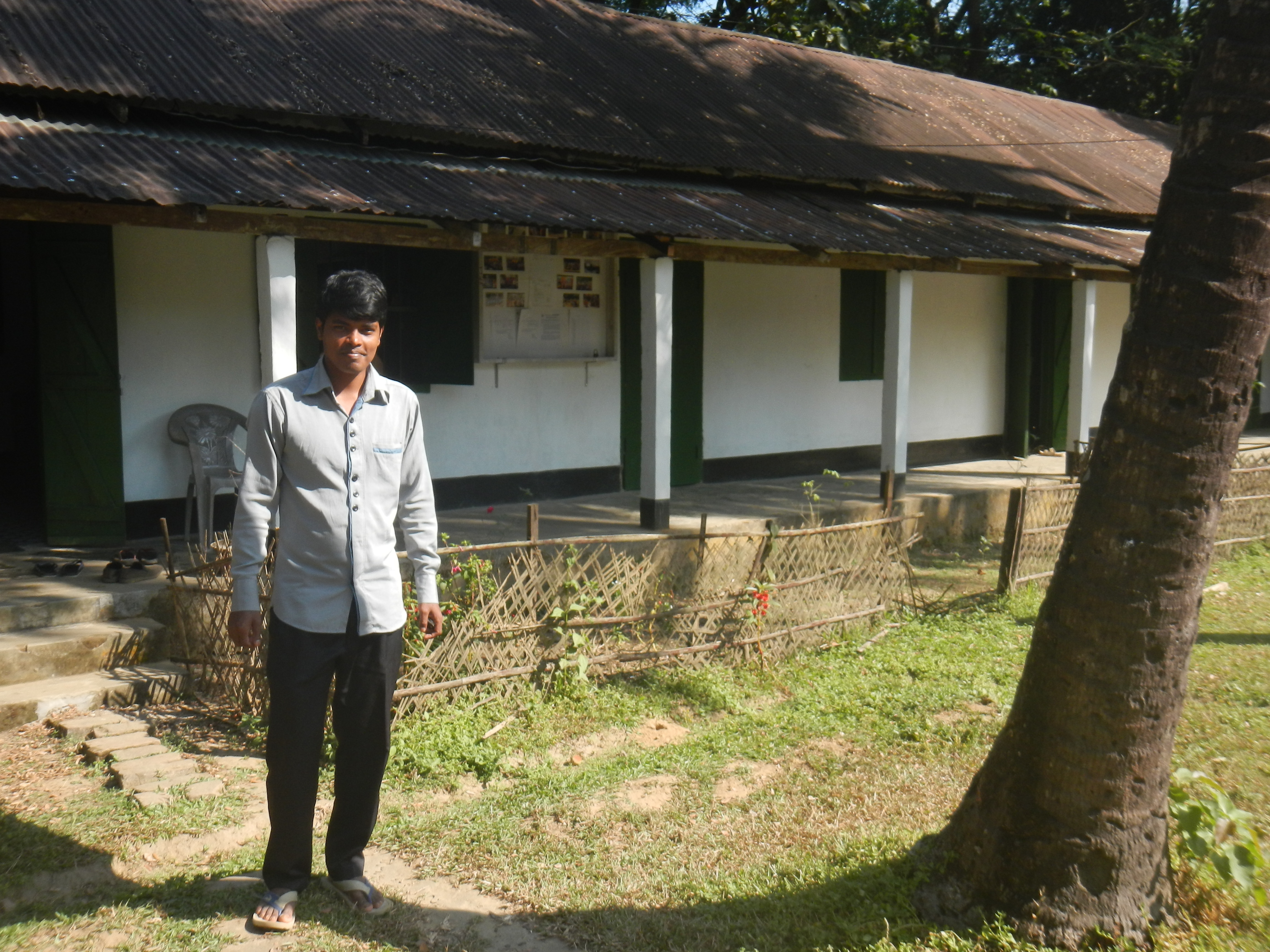 Story and photos by Sara Klassen

“I came from a marginalized family from the lowest social level,” Biplob Rangsa explains. His single mother was a wood painter. “She couldn’t afford to send me to school.” So, Biplob went to school for free on the YMCA compound in Birisiri, Bangladesh. He studied in a long, white building with a green door.

“So many days I went to school with an empty belly. At night I didn’t read and write because my mother couldn’t afford oil for the lamp. I could only study during the day.”

Despite these odds, Biplob graduated from secondary school and university. He now works out of an office in the same long, white building with the green door. He is director of the Birisiri YMCA. He oversees all of this YMCA’s relief and development projects, including a rural clinic and a school similar to the one he attended.

Early one morning in Birisiri, Biplob folds his pant legs into cuffs and wades into the river, surveying its low, still waters. “Seeing the river like this, you would think she is calm and gentle,” he says, “you do not see now how wild the river can be.”

The Samisuri river is central to life in Birisiri. It sustains the people, providing fish and irrigation for rice fields; however, its calm waters swell to a powerful force in the rainy season, and most years it floods its banks.

Two times in recent years the Samisuri ferociously flooded the villages on its banks with waters up to people’s armpits. The current was so strong it carried away cows and goats. The floodwaters stayed high for four days requiring the YMCA to go on rescue missions along the banks. Biplob says helping with one of these missions was one of the most memorable experiences in his job.

By boat, the rescue team travelled up the river searching for people standing in the floodwaters outside their homes.

“It is not easy to describe. I saw the fear in their eyes. You could see dead animals floating and the homes destroyed.”

The YMCA distributed kits of food and oral saline powder for rehydration. Many people had became ill because they drank the floodwater.

“They had no bowls and no way to cook because all of their possessions were under water.”

He tells of one couple whose baby was born thirteen days before the flooding. When the rescue boat went past calling out, “Wave your hands, shout if you are there,” the boat engine was too loud to hear this family crying for help.

“We couldn’t see them because there were so many trees, so we passed them,” he says.

“On the way back we finally saw them.”

The family had stood in high water all night and morning, the woman keeping the baby warm, the father keeping her warm with one arm and waving for help with the other.

“I hear and see stories like this and I am very pleased with my work. What we are doing is not much, but we are trying to help their situation. That’s why I stay out of company work even though I could get a big salary,” Biplob says.

This is the kind of work he was doing before attending School of Peace.

Biplob says SOP strengthened his passion for this work and gave him tools like structural analysis to understand himself, his community, and his society better. SOP also changed the way he sees people.

“Before I joined SOP these eyes judged people differently. When I came back from SOP I had different eyes. I see people as human beings, not as their origins or their skin color. Now I consider everybody as my brother and sister. This is a big change in my life,” he said.

This change shows in the way Biplob does his job now. He not only oversees the YMCA’s development and relief projects, but he also maintains friendships with people in the community. When we visited him in Birisiri, he took us to visit the YMCA clinic and school in a rural village and to the communities of indigenous Garo people, who are facing difficulty because they do not have land rights.

At each place we visited, he greeted people with a warm smile and asked if we could sit and talk. He explained that all we want is to learn about people’s lives and hear their struggles. At each place we sat and talked and took tea.

However,  it is challenging for Biplob to integrate interfaith work into his formal work. YMCA is a Christian organization, so there are sometimes barriers to doing interfaith work as part of their programming.

“Although we do not discriminate in our resource sharing, if the local board does not think this [planning interfaith activities] is important work, we cannot do it,” he says.

Biplob’s commitment is stronger than these barriers. He managed to create enough budget to do a Tools for Transformation workshop in Birisiri, and he pursues interfaith activities outside the work week.

On Fridays when he is free, he tries to go to the mosque to visit his Muslim friends.

“This is my first concern: I have to make a good relationship with them. I just listen to their stories. We exchange our life struggles and share— they share their thinking on us (Christians) and I share my thinking about them. Sometimes I invite them onto my YMCA campus. If they invite me to any religious program I like to join them. I have two Imam friends. Several times I visited their families and we sat together and discussed so many matters,” he says.

One year Biplob invited the Muslim leaders to the YMCA during Ramadan.

“I said, ‘Why, as a leader of a Christian organization did I invite you here? Because I want to build friendship so we can help each other.’”

Together they broke the Ramadan fast with a meal at the YMCA.

This interfaith connection that Biplob strengthened prevented potential conflict in their community soon after.

“After the national election many minority groups were tortured by Muslims, but not in Birisiri. Because of our gathering, Muslims protected the minority groups.”

A Common belief in Justpeace

SOP has changed the way Biplob does his work with the YMCA and has challenged him to find ways to use his role in that organization to facilitate interfaith relationships in his community. It has also strengthened his marriage.

Biplob met his wife, Shalomi, before he participated in SOP. After he attended Shalomi decided to go the next year. This common experience helped them understand each other’s work in the community.

“I have a better understanding of what she is doing and why she is doing it, and she is also clear about why I am doing my work and the importance of it. It helped us to know each other better and support each other more,” Biplob explained.

The couple even named their son Max after Max Ediger, ICF’s director and coordinator of the School of Peace.

Biplob sees SOP as a valuable course to introduce new ideas and issues to young people and transform them quickly. He is concerned for future funding of this expensive program, but if SOP can continue, he hopes conflict and violence will be reduced everywhere.

He maintains this reasonable hope: “We don’t need to transform a thousand people. We need only to transform a quality ten or 100 people. Then we can change the world.”