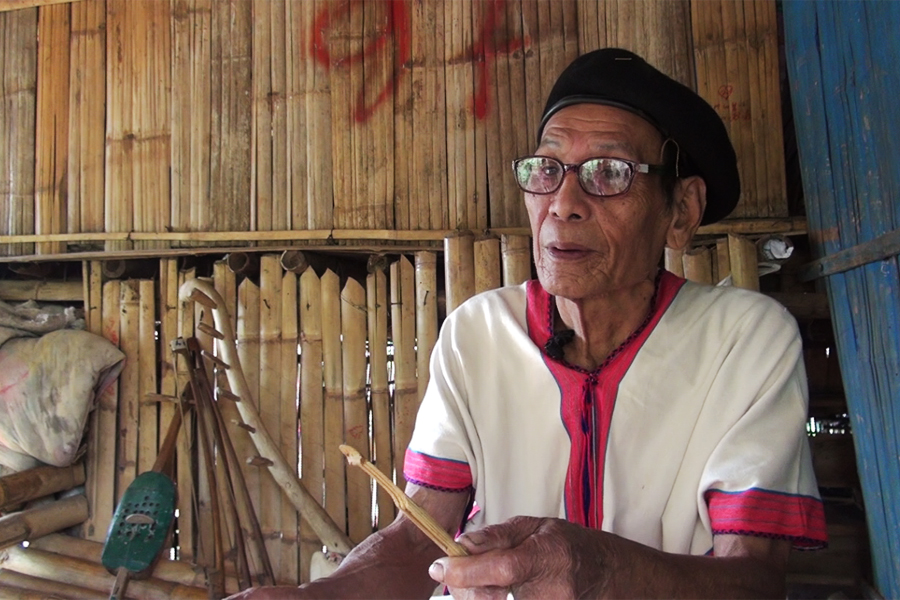 When I was in Umphiume refugee camp on the Thai/Burma border making a video about Karen traditions and culture, I met and interviewed 85-year-old Pu Hsaw Hpah Wa. During the interview he told me he is very worried that the use of traditional musical instruments will erode and then slowly disappear from Karen life. The young people now love Western music rather than local traditional music.

The Umphiem refugee camp is the second largest of nine refugee camps on the Thai/Burma border. The population is approximately 12,000 and people from a wide range of ethnicities live there. Even though most of the population is Karen [80%], Pu Hsaw Hpah Wah, is worried that Karen traditions will disappear soon.

The man explained that if we don’t respect and use even one small traditional instrument, we begin to lose our identity. He one of the only people in the camp who has knowledge about Karen culture and have tried to maintain and preserve the traditions in the camp. He is worried the younger generation are not seriously interested in their own traditions.

“The violin is my favourite instrument,” she said. “It is what I like the most.”

I started to think about why we lose our traditions and culture. There are many ways we can lose them, but one thing that I would like to say is that we were forced to leave from our homeland because of war and because the Burma army destroyed our villages. Because of this we lost our way of life. Now we have lived in refugee camps for 30 years on the Thai/Burma border.

I remember when I was young, one Burmese general said, “One day if you want to see Karen people, you will have to go and see them in the museum.”  This is the way that we were destroy by the Burmese military and those Bamar ethnic people who think they are superior to us.  When the Burmese generals meet with the Karen leader, they usually say, “Forget the past. We will start everything new.”  To me that means they want us to live like them, do what they say and then there will be no problems in the country.  And all the while we lose our traditions and culture when we become like the Bamar ethnic.

On October 12, 2015, the Burmese military backed government removed the KNU (Karen National Union) from its list of illegal organizations, but they didn’t use the official name of Karen National Union. Instead they used the name Kyin National Union.  This is the way to eliminate us.  One of the Karen leaders said that this change of name destroys our identity and history.

The more we try to explain the Burma problem, the more complex and complicated it is to understand. The Burmese military keeps changing things and creates confusion. One example of that is name “Myanmar.” In 1989 the military junta changed the name without approval of the people. I don’t use the word Myanmar for the name of the country anymore. I don’t consider myself Burmese. I am a Karen from Burma.

Now the country is moving forward to democracy because Aung San Suu Kyi’s party, National League for Democracy, won the election. Many people were happy and I am also happy with the result. I’m not satisfied yet, though. Our ethnic rights are ignored and identities are not recognized.

When looking back to refugee camp, why we lose our traditions and culture, not because of us, but because other persons believe that they are superior or higher than us.

When I saw a famous Burmese comedian named Maung Thura “Zarganar” speak, he said that Burma still has conflict and instability because we don’t respect other ethnicities, traditions, cultures and languages. That is why fighting in Kachin State is happening now.

In the future of Burma, important change need to be made. Not only is there a need to change from military dictatorship to democracy, but there must also be respect for all ethnicities. The Bamar (Burmese) ethnic people have to understand the root cause of the problem in which the system discriminates again other ethnic people in Burma in order to build Burmanization. So when we understand it, we can move from tolerance to acceptance to engagement.  Burma can then be a model of a peaceful country in Asia and the world.

Saw Mort is an alumnus of SOP 2007. He is Karen and lives on the Thai/Burma border.