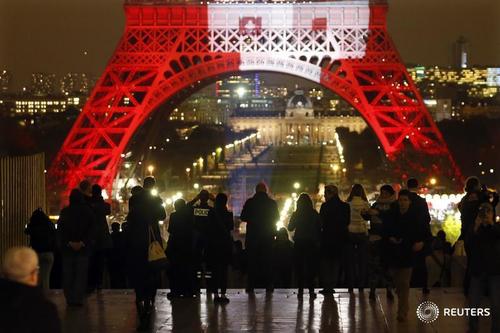 Following the brutal attacks in Paris, my Facebook and Twitter feeds exploded with news articles, haunting pictures and videos, and calls for action.

These calls included pleas for rational thought and understanding for the 99.997 per cent of Muslims who do not condone this violence. People continue to send out appeals on social media to all who will listen for unity and to resist Islamophobia.

But there are also many calls to rain fire on Daesh (ISIS/ISIL/IS), no matter the cost and to close borders to desperate refugees seeking asylum or risk national security.

My home country of Canada has seen anti-Muslim backlash recently, as well. A mosque in Peterborough, Ontario was set on fire Saturday, an act the president of the local Muslim association said was “clearly a hate crime” to the Canadian Broadcasting Corporation. It wasn’t the first time this mosque has been targeted.

Special Facebook profile picture banners denoting support for France were made available, and a “safety check” feature was implemented following the attack in Paris. The same considerations were not given after bomb blasts rocked Beirut only a day earlier. The social media giant was accused of valuing the lives of Western victims more than those in the Middle East and other regions, according to Al Jazeera English.

A response from ICF

In light of these horrifying attacks, the death, the fear people are feeling, and the hate being espoused, action must be taken.

The Interfaith Cooperation Forum was created following the September 11, 2001 attacks on New York City and the subsequent “War on Terror.” People of faith from all over Asia expressed concerned their faiths were being manipulated to justify brutal violence, intolerance, and persecution of the other.

In 2003, nearly 40 people came together in Parapat, Indonesia to brainstorm ways to respond. There the ICF was born as a way to bridge people from different countries and faith backgrounds.

For many years ICF has facilitated workshops, seminars, interfaith peace and justice demonstrations, and schools of peace. Our work is meant to introduce people of faith to one another and to help them band together to work for justice and peace in their communities.

It’s been amazing to see the transformation. People we doubted would ever be open to seeing their enemy as a person did just that right before our eyes.

We believe unity, compassion, and dialogue are especially important in polarizing times like these. Giving in to the us versus them rhetoric breeds feelings of otherness and isolation and contributes to radicalization in our communities.

We at ICF affirm the humanity of each of our Muslim brothers, sisters, and siblings of differing gender identities. We offer our prayers, sympathy, and concern for the families and friends of those who lost loved ones or who were injured in Paris and Beirut.

We encourage all within our network to work for peace during this trying time by engaging with people named “the other” by the world’s superpowers. We call on you to open wide your borders, your gates, and the doors of your home to all who are fleeing persecution. We ask you to look past the polarizing media coverage and the stereotypes to see facts and reason.