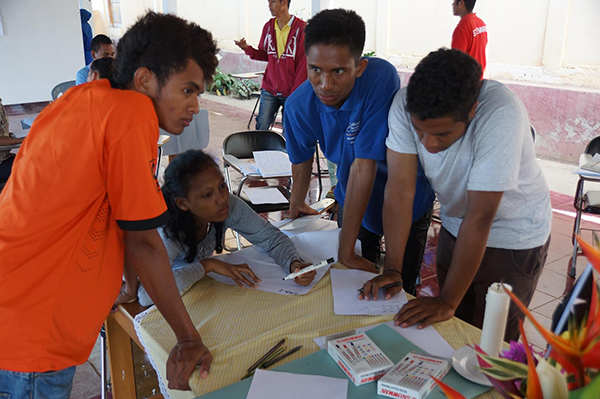 Recently the Interfaith Cooperation Forum helped put on a mini School of Peace in Dili, Timor-Leste.

Fourteen students from Indonesia and Timor-Leste who come from different faith backgrounds gathered for nine days of workshops on peace, justice, and transformation.
The workshop took place at the Sisters of ISMAIK residence from October 12-21 and looked at topics of identity, human rights, including women’s and children’s rights; and justpeace.

ICF’s annual (and sometimes biannual) School of Peace is a four months-long intensive program, which invites 15-20 people between the ages of 20 and 30 from conflict-prone areas in Asia to live and study together. Conversely, the mini SOP is shorter and for peacebuilders from one or two nearby countries.

According to Max Ediger, the director of ICF, and coordinator and instructor of the SOP, a smaller, more localized version of the SOP is a great opportunity for people to band together locally with a common goal in mind.

“They can bring together 15-20 people from their own country and build up the network here,” he says.

According to one of the organizers and alumni of the 2012 School of Peace in India, Julio da Costa, it was a successful and life-changing workshop.

“Most of them in their personal reflections shared their dreams of what they will do for their community where they live.” – Julio da Costa

“After nine days of learning together at the Mini SOP the participants were very much changed and inspired by the lessons and sessions they got from the facilitators. Most of them in their personal reflections shared their dreams of what they will do for their community where they live. They want to fight justice and work for peace to eliminate the injustice that’s happening in their own communities.”

For Leonardo Gamboa Mareal from Timor-Leste, mini SOP was impactful as well.

“I could share about conflicts and problems in my village. This was the first time for me.” – Leonardo Gamboa Mareal

“I could share about conflicts and problems in my village. This was the first time for me to have the opportunity and it was very encouraging for me that people listened with interest and concern,” he said.

By the end of the workshop, the participants formed a national working group and had their first meeting. In the future the group will plan activities at the national level.

ICF is proud to welcome new members into the family of organizations and people working for justpeace.